Some months ago I was grateful to locate and be able to post a photo of Gertrude Hirschler, one of the primary translators of Rav Hirsch's writings. Which reader of Hirsch hasn't read her fine translations? It was great to see a photo of her.

And now, through the help of Mr. Robert Schleimer, formerly of Munk's synagogue in London, I have been able to locate the photo of the other great Hirsch translator Dr. Isaac Levy, first translator of the complete Hirsch commentary on Chumash. And here it is: 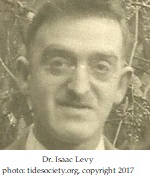 What a debt of gratitude we owe him for his epic translation of Hirsch's epic commentary on Chumash. And here's one of Dr. Levy's translations:

"If we understand these sentences of the תייכ aright, then the sentence which stands at their head: forewarns one not to take the following sentences to mean that one is completely to ignore and remain in ignorance of all knowledge and science which has been gained and nurtured by non-Jewish sources or which have no direct bearing on the knowledge to be gained by the study of the Torah. Inasmuch as what is commanded is: עשם עיקר ואל תעשם טפלה, the permission to occupy oneself also with other spheres of knowledge is assumed. Only, the knowledge of the Torah and the understanding we derive from it is to be our principle concern and to be regarded as having been given to us as the absolute and firmly established Truth. Only as accessory knowledge and in as far as they serve to truly help the study of the Torah and are subordinated as the טפל to the עיקר, are they to be studied. But the Torah and all its teachings must always remain that which we have received from Above and must be the yardstick by which we measure all the results obtained by other spheres of learning. Only that which is in accordance with the Truths of the Torah can remain true for us. All that we accept intellectually as well as all our actions must always be considered from the point of view of the Torah and be within the lines of the doctrines it teaches, so that we only accept and adopt  that which is in accordance with them, and do not adulterate the knowledge we draw our of the Torah with ideas which have developed form other and strange premises."

Wisdom from the Gentiles: John Steinbeck

I always come back to Steinbeck who was of German, English, and Irish decent.

“And now that you don't have to be perfect, you can be good.”
― John Steinbeck, East of Eden

“But the Hebrew word, the word timshel—‘Thou mayest’— that gives a choice. It might be the most important word in the world. That says the way is open. That throws it right back on a man. For if ‘Thou mayest’—it is also true that ‘Thou mayest not.”
― John Steinbeck, East of Eden

“All war is a symptom of man's failure as a thinking animal.”
― John Steinbeck

“To be alive at all is to have scars. ”
― John Steinbeck, The Winter of Our Discontent

“A sad soul can kill you quicker, far quicker, than a germ.”
― John Steinbeck, Travels with Charley: In Search of America

“I believe a strong woman may be stronger than a man, particularly if she happens to have love in her heart. I guess a loving woman is indestructible.”
― John Steinbeck, East of Eden

You might think that fear of Heaven nullifies the self. We say each morning, what is my power, what is my knowledge? Compared to that of Hashem, our power is nothing. But that's not all there is to self. As we strip away the identity of our power, we reveal a different self, a religious self. And we reveal this as well when we recognize the greatness of G-d. After all, we are created in His image. So as He grows in our awareness, our creation in His image grows. Fear of Heaven is accompanied by self-respect.

We need this self-respect to avoid sin. If a person sees himself as garbage, what's to stop him from acting like that? But if he is aware of his own dignity, then he has good reason not sin so as not to offend his own dignity. Dignity matters in halacha. If one spots a lost object in the sewer, he is not obligated to crawl into the sludge to get it. Dignity is not ego. Everyone is entitled to dignity. We say each morning, Who crowns man with tiferes. Rav Hirsch translates this as honor. One must keep this in mind as he engages musar teachings, as he hears of concepts like mesiras nefesh. All of it must be done with dignity. This is not the same as pursuing honor. A dignified person looks dignified even when dishonored. The mitzvos should give a man dignity and he'll need that dignity to pursue the mitzvos.

Along these lines we recognize that the physical always follows the spiritual and dignity is a kind of physicality. The Rambam says that a mitzvah pushes off Torah study. This is not a random requirement and not one to bemoan. As R' Avigdor Miller notes, mitzvos implant the message of Torah within us. This is why kiddush is accompanied by wine, to give the words of kiddush importance in our hearts. R' Yaakov Emden says that Torah not studied in order to be acted upon is not Torah study. We need mitzvos to give life to our Torah. Torah needs mitzvos just as mitzvos need Torah. So too, fear of Heaven is followed by dignity.
at 10:54 PM No comments:

I davened in the Ashkenaz shul in Beitar this Yom Kippur. I hadn't experienced a Yekke YK before and found some refreshing characteristics. First of all, the nigunim are cheerier. As someone put it, there's a bounciness to the Yekke davening. It's much less sad. Now maybe you like sad. That's fine. I prefer this. Along those lines, the Chazan never weeps, something I always found to be a bit too personal for the prayer leader to be doing. And the best surprise of all was the shamos at the end. Rather than shout, Hashem hu El-okim, the Chazan sings it, first quietly and then gradually louder, but never shouting. As my host said to me, a Yekke rav never shouts. It's undignified. Look there are different styles. Many people today crave emotional davening. It's the Carlebach generation. The Yekke davening seems to strive more for dignity and respect. I find it to be saner and a more productive religious experience.
at 12:07 PM 1 comment: