Japan Leads the Way: No Vaccine Mandates and No MMR Vaccine = Healthier Children

With a population of 127 million, Japan has the healthiest children and the very highest “healthy life expectancy” in the world—and the least vaccinated children of any developed country.


In 1994, Japan transitioned away from mandated vaccination in public health centers to voluntary vaccination in doctors’ offices, guided by “the concept that it is better that vaccinations are performed by children’s family doctors who are familiar with their health conditions.” The country created two categories of non-compulsory vaccines: “routine” vaccines that the government covers and “strongly recommends” but does not mandate, and additional “voluntary” vaccines, generally paid for out-of-pocket. Unlike in the U.S., Japan has no vaccine requirements for children entering preschool or elementary school.
Japan also banned the MMR vaccine in the same time frame, due to thousands of serious injuries over a four-year period—producing an injury rate of one in 900 children that was “over 2,000 times higher than the expected rate.” It initially offered separate measles and rubella vaccines following its abandonment of the MMR vaccine; Japan now recommends a combined measles-rubella (MR) vaccine for routine use but still shuns the MMR. The mumps vaccine is in the “voluntary” category.
Japan initially recommended the HPV vaccine but stopped doing so in 2013 after serious health problems prompted numerous lawsuits. Japanese researchers have since confirmed a temporal relationship between HPV vaccination and recipients’ development of symptoms. U.S. regulators have ignored these and similar reports and not only continue to aggressively promote and even mandate the formerly optional HPV vaccine beginning in preadolescence but are now pushing it in adulthood. The Merck-manufactured HPV vaccine received fast-tracked approval from the FDA despite half of all clinical trial subjects reporting serious medical conditions within seven months.

Read the entire article. Interesting that a country that some associate with avodah zara doesn't make an avodah zara out of medicine as they do in the USA.
at 6:39 AM No comments:

CDC has allegedly known since 2001 - childrenshealthdefense.org

Thompson, a 17 year CDC veteran, is the author of some of the leading studies cited by CDC to exculpate vaccines from the autism epidemic. Thompson, who still works at CDC, released the raw data sets that he says his bosses at CDC ordered him to conceal. Those data allegedly show that black boys who received the MMR vaccine prior to three years old, as the CDC recommends were 3.36 times more likely to receive an autism diagnosis than those who received the vaccine after 3 years of age. This effect was not observed in other race categories. Nevertheless, when the CDC scientists published their results in Pediatrics in 2004, they reportedly omitted the damaging data, fraudulently declaring there was no risk of autism from the MMR vaccination. In August 2014, Dr. Thompson issued a press release through his attorney stating, “I regret that my coauthors and I omitted statistically significant information in our 2004 article published in the journal Pediatrics. The omitted data suggested that black male children who received the MMR vaccine before age 36 months were at increased risk for autism.

https://childrenshealthdefense.org/video/rfk-jr-taking-on-big-pharma-the-vaccine-industry/
at 6:54 AM No comments:

She points out that Lester, England was highly vaccinated but was still experiencing a high rate of small pox. They stopped vaccinating, despite threats that they would destroy the world, but the rate of small pox decreased. In fact, when small pox was eradicated, a small percentage of the world was vaccinating. However, during that time, sewage systems were being installed all over the world and this is the main reason that small pox was substantially reduced. Less germs were being transmitted. The reason she describes pox as being reduced and not eliminated as the corporate press tends to describe it is because there are other forms of pox, like monkey pox, that are still out there. 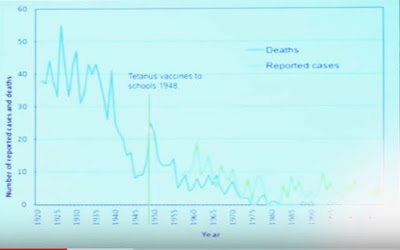 She points out that an essential problem with the basic method vaccines is that it introduces a disease in a manner different from how a disease normally enters the body. For example, measles is inhaled but the vaccine is injected directly into the bloodstream so the body's response to the injection is different than it is when it builds a natural resistance. And then of course the vaccine contains all kinds of other chemicals (mercury, aluminum, formaldehyde.

She says also that proper studies are not really being done on vaccines. A true blind study would take half a population of vaccinated and half not. However, the great majority of people have been vaccinated. Most of the time when studies compare vaccinated to not vaccinated the non-vaccinated have been received most vaccinations but might be missing one of them.

"I say nobody has proven to me that they are safe, that I have scientific reason to believe that the components that are in them, and how they act upon the immune system and the potential for autoimmunity and cancers and neurologic diseases is there, and so I cannot say, guarantee that these vaccines are safe, not even one of them, let alone numerous vaccines in the childhood vaccination program given earlier and earlier and more and more."


She also commented on the startling aggressiveness of many people with regard to getting vaccinations. They tend not to want you to hear the other side.

"And what you might notice if you have been in the middle of this problem yourself is that the people who want to vaccinate are often very aggressive, and they don't want you to hear the other side. And that should make a light-bulb in your head go off, why don't they want me to hear the other side, why don't they think I can actually listen to both and come up with my own decision. See I will never tell you not to vaccinate, but they will always tell you to vaccinate for everything. That alone I believe should be a red flag to you. That I'm saying you listen to everything and then you choose. What you do is your responsibility. And that's not what the people who are supporting this aggression vaccination campaign, more and more vaccines all the time for little babies (are doing)."

This is a rational person, an educated person. She is a medical doctor. She is a scientist. The image that anybody who questions vaccines is a nut, is ignorant, is just listening to propaganda is itself propaganda. This woman is incredibly well informed and experienced. She is a doctor. Her arguments are very strong.